NEW ACQUISITION FOR FUN FOR FANS

It has been said all good things must come to an end, which is what transpired on Tuesday October 19 2021 when RIP IT UP left the FUN FOR FANS stable for a new future in the Kelly Hoerdt barn after the bay gelding was claimed after a very respectable third placing in the second race of the day.

The focus is now turned to the new prospect , a dark bay filly named OUTLAW BLUE ISLE who was purchased not 35 minutes after "Ripley's" departure. Fred remarked she's a big good looking filly, and he's excited about her upcoming race on Sunday October 24th where she   has drawn post position #6, and will be racing for the Olds Women's Shelter. 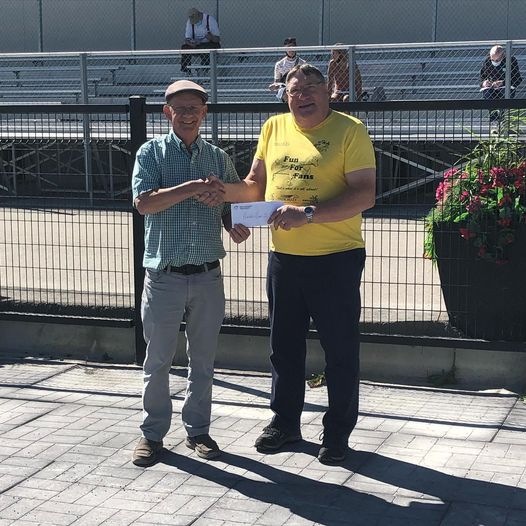 Fun For Fans donates $1,415 to the Airdrie Over 55 Association.For September,  Rip It Up will be raising funds for the Alberta Cancer Foundation!
RIP IT UP - is the Fun For Fans horse to watch and cheer on for the groups in partnership in 2021!
So far, this handsome bay son of SMART SHARK has a win and a show out of 9 starts . We look forward to seeing the charities come out to cheer him on !
As of July 27th he is not scheduled to start, but will update as he is next entered.

With 2020 being all but shut down for racing with live spectators, sadly there were no Fun For Fan events in 2020.

It's always nice to be appreciated.... Over $3,000 raised for the Stollery!
"We are very pleased to share this beautiful Thank You card presented to Fun For Fans, ASHA Executive Director Fred Gills, and Trainer Rod Starkewski. We are so excited to work with this amazing group. And Sureburnsblue did a fantastic job raising funds for the Stollery." 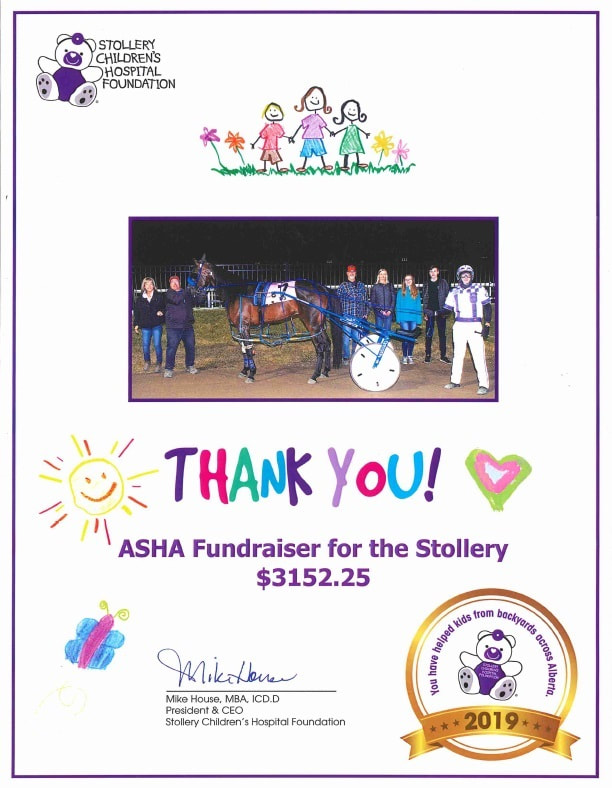 Two more groups recently benefited from the efforts of Fun For Fans.
​ Pictured below are photos from the track at Century Mile Racetrack and Casino for the Chestermere Regional Food Bank and Perky in Pink 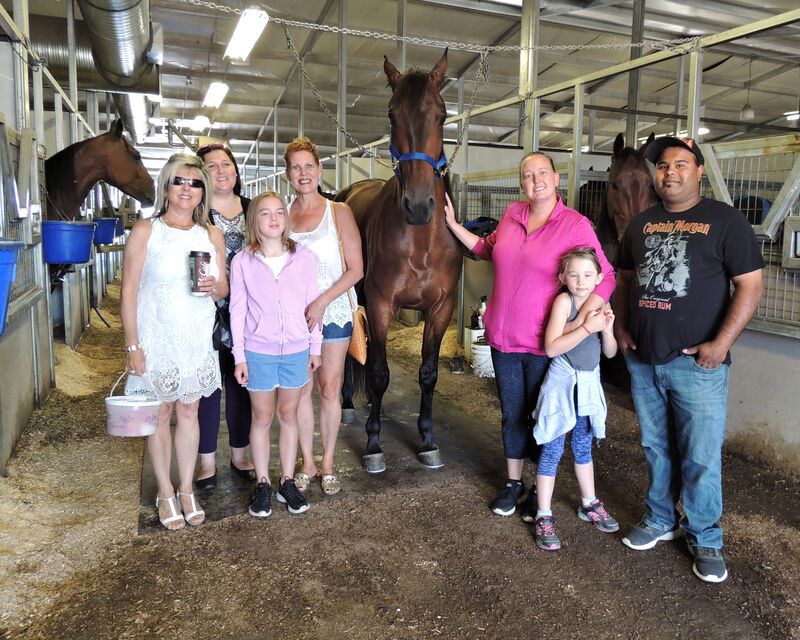 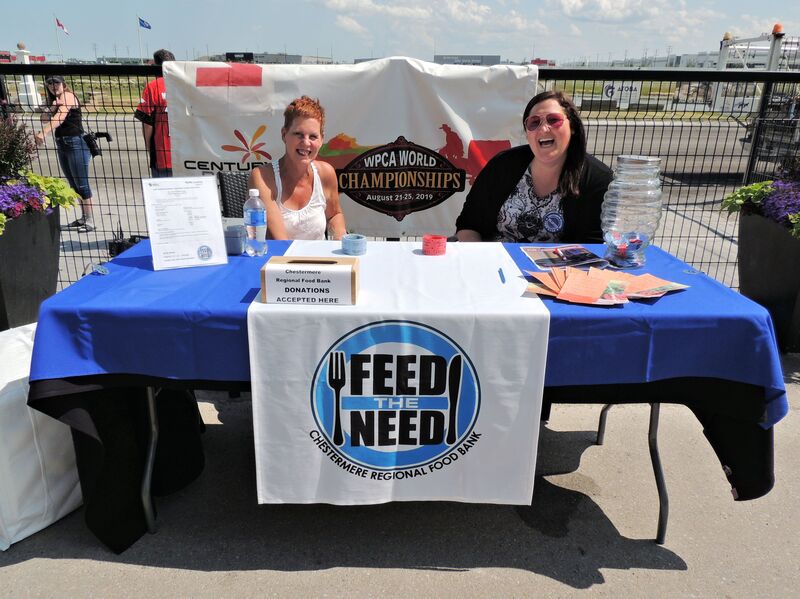 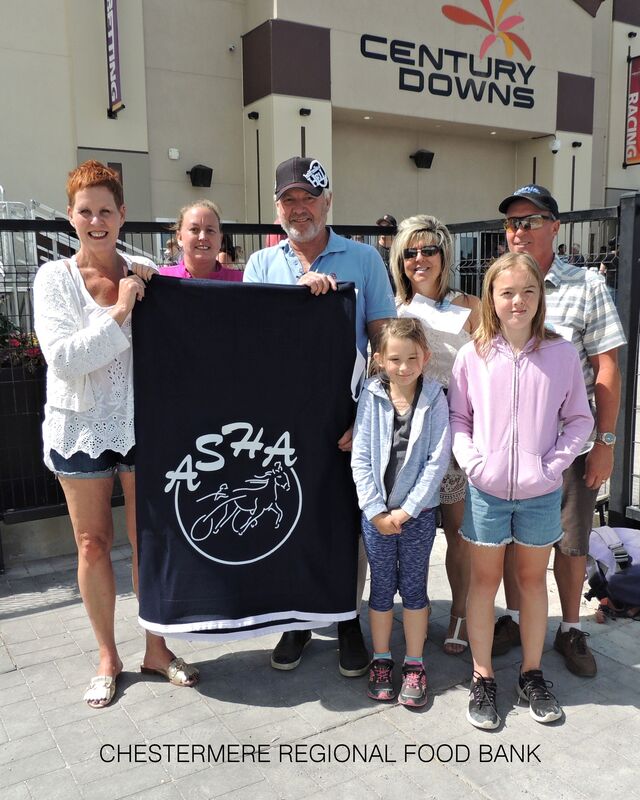 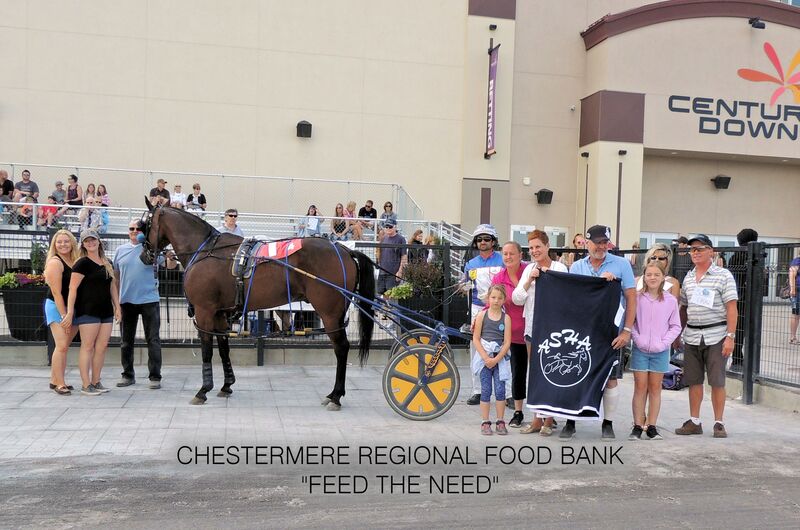 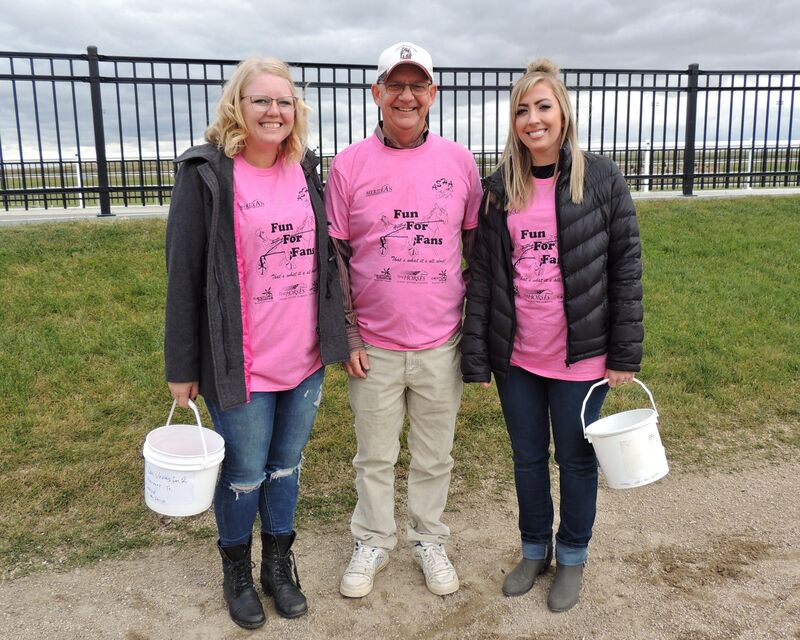 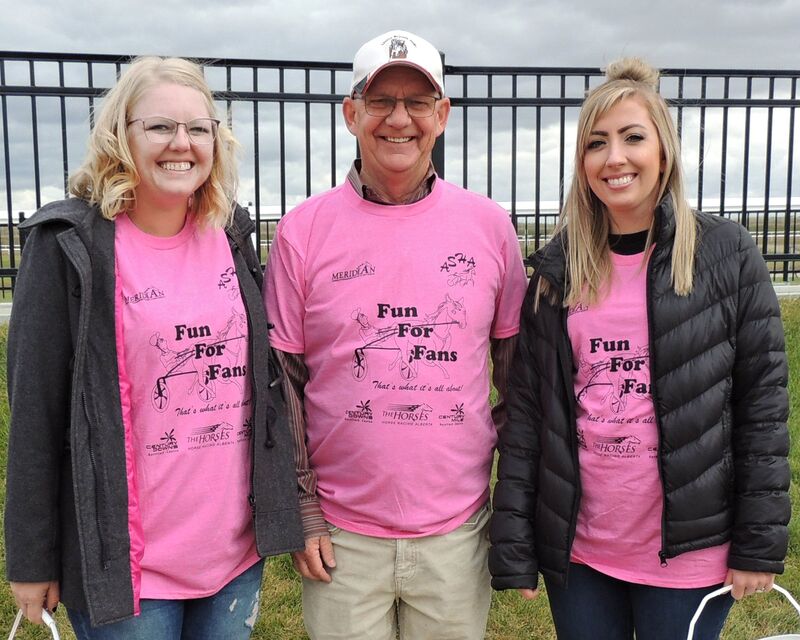 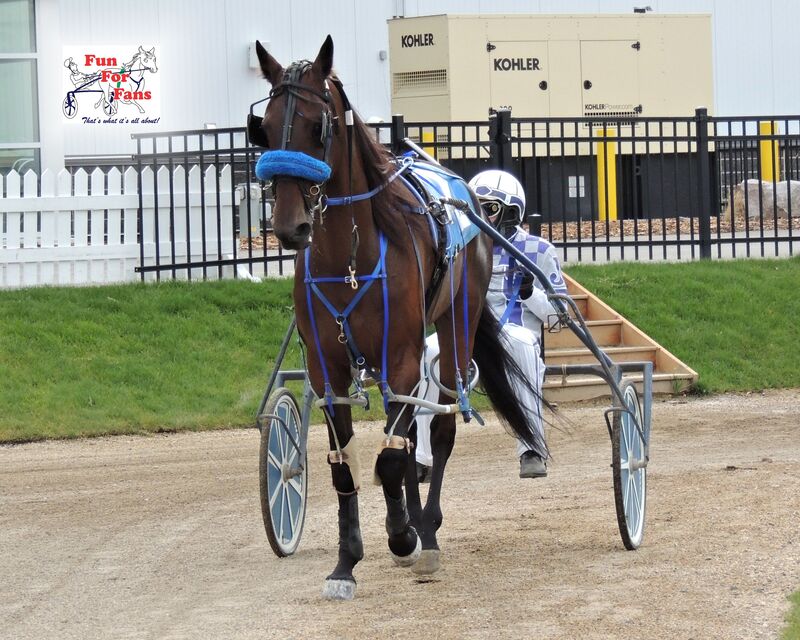 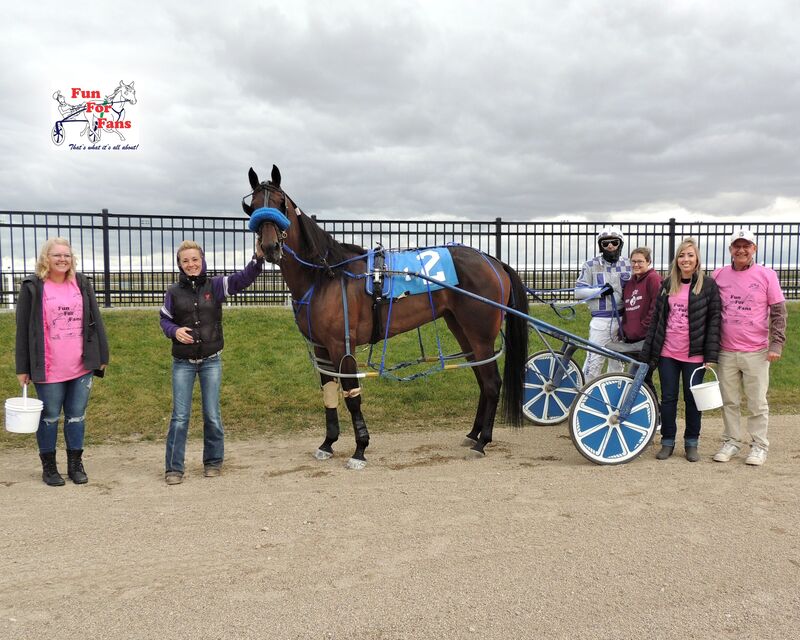 On Wednesday July 24, the AIRDRIE OVER 50 CLUB was presented a cheque for $2652.75 thanks to the amazing efforts of FUN FOR FANS horse SUREBURNSBLUE. You can view the replay at Century Downs Live Stream for Wednesday July 24, Race 4! 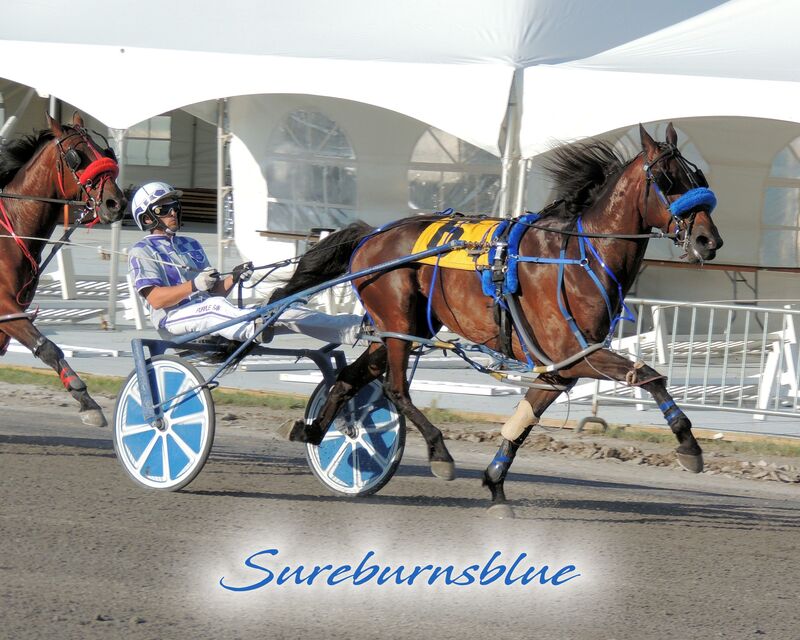 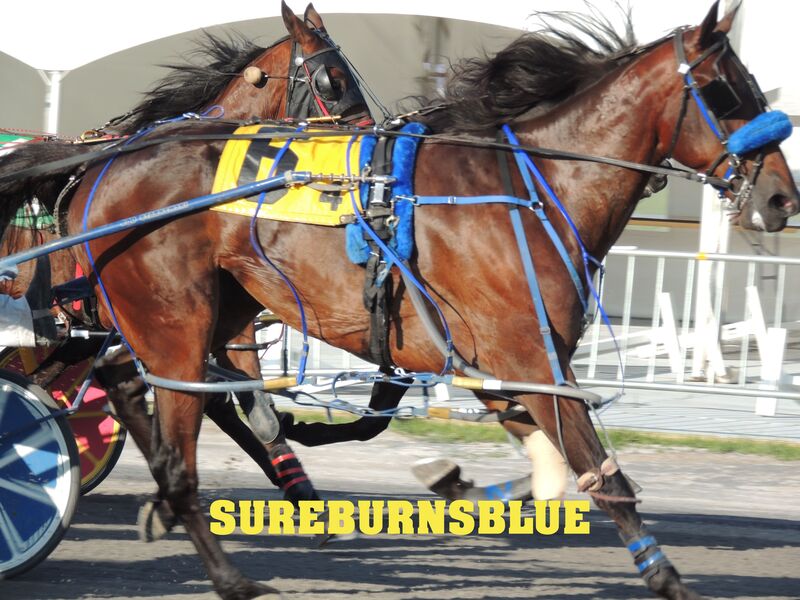 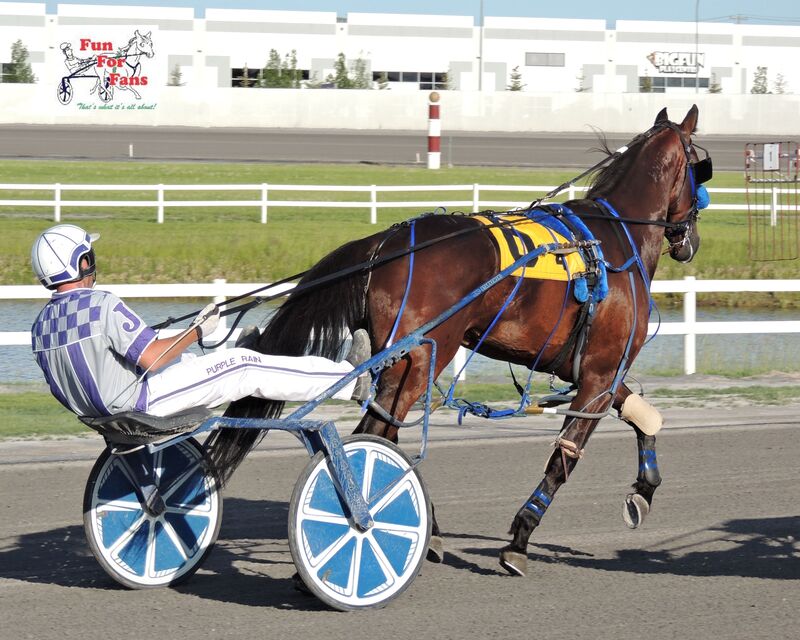 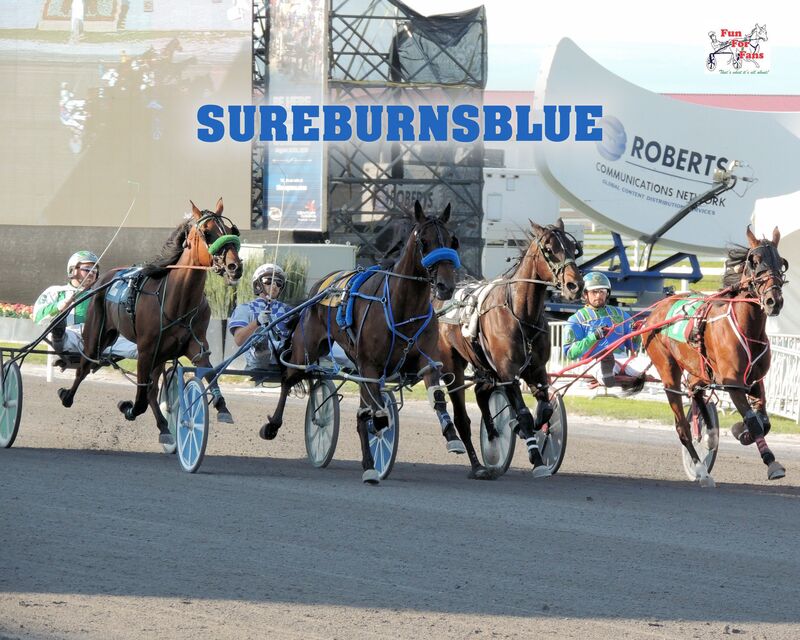 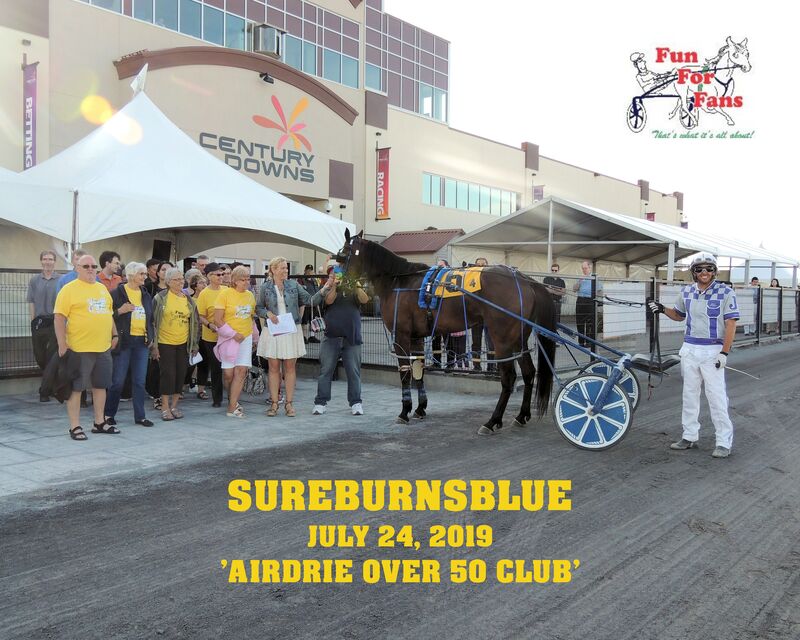 In 2010, Meridian Farms invited the ASHA to collaborate in the creation of a project to give back to the communities in Alberta where racing takes place and where many of our industry families reside and make their homes. The idea was to race a specific horse and each month give a percentage of that horses earning to a charity/non profit group. For that month we invite the group out to watch and cheer on their "Fun For Fans"horse.  This would give the charity/non profit group a great way to raise awareness for their cause as well as offering them a free day of entertainment.  Each month, a different charity/non profit group from the area comes out for a day at the races and cheer on "their" horse. At the end the the month, a percentage of the proceeds from the purse earnings of that horse, is given to the charity/non profit organization that is designated that month's, "Fun For Fans"group. The remaining funds are used for the care of the horse. In 2010 it all began with the open mare, "Starring Role" who earned approximately $20,000.00 for the program. Fun For Fans was definitely turning into quite a stable.

In 2012, Starring Role was followed by Pop Gun, Murphy Delivers, and Whos In The Hat. In 2013 the stable raced No Fear and Cool One. 2014 brought Shaker Boy and Polka Dot. In 2015 Meridian Farms purchased Barona Lilac who raced for the group here in Alberta and later went on to race for the charity/non profit program in Nova Scotia when the program in Alberta, through Meridian Farms, added Hurrah, Too Ideal and Fire Dance.  In 2016 the ASHA acquired Outlawburntpopcorn who added very nicely to the outgoing charity contributions. Big Fantasy and Thats Bunk also joined the stable.  In 2017, the stable race Outlawburntpopcorn, Outlawintriguedbyu, and Big Fantasy.

For 2018, Fun for Fans continues with Outlaw Tootsieroll, and Nogardeo. You never know what exciting things will happen next. Without the dedication and contributions from Meridian Farms (High River), and help from Horse Racing Alberta, Century Downs Racetrack and Casino (Rocky View), and Northlands Park (Edmonton), this program would not be possible.

The Fun For Fans Stable was started by Alberta Standardbred Horse Association executive director, Fred Gillis, as a kind of outreach program to organizations in communities where harness racing was taking place. The idea was to turn over 75 per cent of whatever the horse(s) earned after commissions and fees to organizations that might be challenged to fund raise for things they wanted to do. All that the organizations had to do was show up on race day and cheer on the pacer. The 2016 season was an example of the best and worst of horse ownership, as Gillis explains.

“We had Sotally Tober all set to race for the stable,” said Gillis. “Then a week before the first race for the club, the horse got hurt. He never raced the rest of the season. Well, I was stuck, so I phoned (breeders committee chair) Connie Kolthammer, who runs Outlaw Stables. She and Dave Farrell shared ownership in a filly named Outlawburntpopcorn. Connie let me have it for less than market price. Norm Kennedy (former ASHA President) and I put up the $6,300 and we had a horse to start the program last May.”
Little did anyone know what Outlawburntpopcorn would do at the races. She started off slowly but kept earning modest paycheques and kept generating revenues for a number of area charities. Then in October she scored a $28,000 upset win in the final of the Alberta Marquis for three-year-old fillies, and followed that up two weeks later with a fourth-place finish in the Super Finals, earning $6,400 in the process. The final tally was just short of $58,000 from a 5-5-5 log in 29 starts.
“We paid off all the stable’s bills, turned over a bunch of money to the charities and gave Connie and Dave some extra money for supporting the stable,” said Gillis. “Norm and I got our money back. And we had a bit of a base to start off this year. We’ve leased ‘Popcorn’ to trainer Devann Crick and we’ll get 25 per cent of whatever she makes. And we’ve bought another filly from Connie named Outlaw Intriguedbyu. She’s paid up for all of the stakes races this year too. So maybe, we can have some fun.”
That fun hopefully will extend to a number of charities. The stable will compete for Rockyview Volunteer Fire Department in April, Airdrie Boys & Girls Club in May, Breast Cancer in June, the Airdrie Over 50 Club in July, and Ronald McDonald House in August. September is up in the air as the racing circuit finishes at Century Downs and spends a weekend at Enoch before settling in for the fall meet at Northlands Park.
“For sure, though, we’ll be supporting the Stollery Children’s Hospital again,” said Gillis. “Popcorn was a big hit with a lot of the patients last fall, and we were able to make a few dollars for the hospital even though it was the end of the season.”