National Caretaker Appreciation Day Is Back At Tracks!

For the past three years, Standardbred Canada (SC), in cooperation with racetracks, associations and industry partners across the country, hosted and presented National Caretaker Appreciation Day events. The event last year looked a little different than previous years as racetracks were restricted to hosting the event virtually or with limitations on-track due to COVID-19....read on 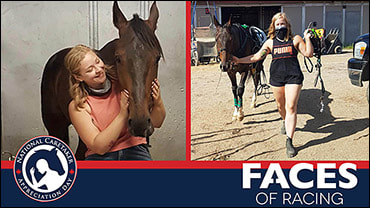 Leading up to the 2020 edition of National Caretaker Appreciation Day virtual events taking place on the weekend of September 18 - 20, Standardbred Canada will profile caretakers from across the country in our Faces of Racing series.
The series concludes with a profile on Shanisty Andres of Airdrie, Alberta who is employed by the Dave Kelly Racing Stable based at Century Downs, near Calgary, Alta.
Most people find themselves using Kijiji to purchase new and used items, cars, real estate, vacation rentals, or concert tickets. Shanisty Andres used it to search for a new job.
After searching online for “Jobs with horses” and discovering an ad posting for Barn Help working with Standardbreds, Shanisty was introduced to the harness racing industry. With zero prior experience or knowledge that harness racing even existed, Andres jumped at the opportunity because of her love for animals and horses. Fast forward two years later, she has now added a handful of Alberta circuit trainers to her resume, and is currently employed by the Dave Kelly Racing Stable.
​
Wind Writer was claimed this past July, which Shanisty confesses is one of the toughest parts of her job. “It’s hard when you get attached to them and they get claimed, but you just have to learn to love them and look after them the best you can while they are in your care.”
Harness racing is filled with ups and downs and having a horse claimed can be one of the less-than-ideal circumstances, but Andres acknowledges that the work she performs as a caretaker is very rewarding and pays off once the horse goes to the races. “Being a caretaker is hard work. You’ve got to be willing to put in the time and remember to always put the horse first, no matter what. They don’t have to win but it’s so rewarding when they try, and you know you helped them get as ready as they could be for the race!”
Since becoming a Standardbred caretaker, Shanisty has learned how versatile and well-rounded the breed is. “I think my favourite part about Standardbreds is how functional they are. They can pull carts and you can ride them. I know there are some horses that retire from racing and go to work on farms. The possibilities are endless,” she explained. “These horses, for the most part, are all bred to go fast. It’s our job as horsemen and women to help them reach their full potential and to pay attention to their body language and attitude. I think the most important thing is not to look at them as a dollar sign but as a horse. The horse doesn’t know whether you paid $3,000 for it or $30,000. It’s your job to help it reach its best, either way.”
Shanisty is motivated to continue working as a caretaker in the industry and to continue learning to ensure she is the best caretaker she can be. “I want to be the best horsewoman I can possibly be, and the only way to do that is to keep an open mind, have a good work ethic, patience and a sense of humour -- you can never take yourself too seriously!”
​

Caretakers: The Foundation of the Industry

Caretakers are the foundation of the horse racing industry. The horses are totally dependent on those who care for them around the clock, 365 days a year, and a caretaker is the first and often the last person the horse sees each day.
Most often they are behind the scenes, yet their work is front and centre for the entire racing community to see when the horses step onto the track, or into a sales ring.
Owner Adriano Sorella: “Caretakers are part of the heart and soul of the industry. From dust to dawn caretakers are there for the animals. It’s a lifestyle for most, and I respect and appreciate the ones that have given my horses the care they deserve”.
Standardbred Canada’s Rachel Oenema produced this video, 'Being A Caretaker', that shows caretakers hard at work.
So how does someone become a caretaker? For the majority, it means finding a trainer to work for and having “on the job” training. There are also two educational institutions that have programs / courses specifically for grooms – Equine Guelph and Olds College.
Equine Guelph (EG), based at the University of Guelph in Ontario, offers several diplomas and certificates in equine studies, and many of the courses and programs are geared towards caretakers.
EG has collaborated with the horse racing industry to offer several short online courses, free or at a discount to AGCO or HRA licensees, through the Horse Portal. The courses are intended to bring racehorse owners and caregivers together to learn about optimizing equine health and performance as a community.

Alberta’s Olds College offers a Professional Racetrack Groom Course. The program has a blended approach that allows students to study online and learn from and practice with industry professional instructors while earning a wage working in the industry. The next term for this program starts in January.
​
The caretakers’ work at the track is only the tip of the iceberg. Racing a horse is generally the culmination of a week, or many weeks of hard work that includes paying attention to every single meticulous detail that goes into ensuring that the equine athlete is healthy and fit to race!
This weekend, September 18 – 20, is National Caretaker Appreciation weekend. Let’s recognize the caretakers and show them how much they mean to us, to the horses and to the industry!

Leading up to the 2020 edition of National Caretaker Appreciation Day virtual events taking place on the weekend of September 18 - 20, Standardbred Canada will profile caretakers from across the country in our Faces of Racing series.
The series continues with a profile on caretaker Jackie Starkewski of Lamont, Alberta.

A trip to Stampede Park in the late 1980s was the catalyst for a lifelong passion, career and a way of life for veteran caretaker Jackie Starkewski.
The visit to the Calgary track was her introduction to harness racing. “A friend of a friend bought a horse and I went to Stampede to see it and I was hooked,” explained Jackie. “I met my husband Rod (Starkewski) shortly after and the rest is history.”
It wasn’t too long following her excursion to Stampede before Jackie found herself working for trainer Jack Beelby. At that time her future husband was working for Bill Companion. Jackie & Rod recently celebrated their 27th wedding anniversary.
For almost three decades, Jackie has worked with the horses alongside her husband, and has become an indispensable part of the Starkewski Racing Stable and its success. This year Rod is currently training and racing about fourteen horses on the Alberta circuit, including a dozen horses that they own or co-own. Jackie cares for anywhere between seven and 10 of those horses, depending on what horses are turned out.
Thirty years of doing any type of job might more or less make you an expert in that position but Jackie feels that there’s always something to learn in the care and training of Standardbreds.
“My advice to new grooms is to pay attention to the horses, get to know them and respect them, they work hard for us. Be humble, there are always things to learn.”
Honoured as Alberta’s Groom of the Year in 2010, Jackie looks up to several horsewomen in the province. “I really have respect for Connie Kolthammer of Outlaw Farms and Raeann Gemmill; their knowledge of racing, training and breeding is inspiring. They both motivate me to keep going.”
For several years now, the Starkewskis have been involved with the Alberta Standardbred Horse Association’s Fun For Fans Stable. This initiative was started by ASHA’s executive director, Fred Gillis, as an outreach program to organizations in communities where harness racing was taking place. The idea was to turn over 75 per cent of whatever the horse(s) earned after commissions and fees to organizations that might be challenged to fund raise for things they wanted to do. All that the organizations had to do was show up on race day and cheer on their horse. 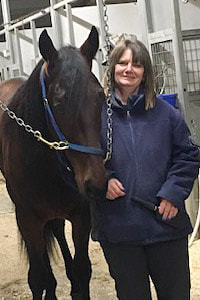 The victory was the filly’s first in Sires Stakes action and her biggest of four wins from 22 starts during her debut season, and for the bettors, the victory was worth $295.10 for a $2 win wager.
The Starkewskis have been involved with several other horses that have raced for the Fun For Fans Stable including one of their homebreds, Sureburnsblue, who raced 39 times in 2019, scoring nine wins, posting 25 top-three finishes and bankrolling over $34,000 in earnings.
As many caretakers will tell you, it’s not hard to get attached to the horses you care for, and there’s usually one culprit who seems to command extra special attention. In Jackie’s case, that one is Crackle N Burn, a homebred out of their mare Crackers Hot Shot. “He tells me when he wants to go out in the morning and insists that I walk him in the afternoon with my pockets full of bananas. He has me trained very well.”
The bananas must be working as the four-year-old son of Blue Burner has hit the board in eight of race races and has more than $17,000 in earnings this season to date.
When her horses are racing, Jackie admits she is a bit superstitious. “I have one silly ritual, the tape in the horse’s braid has to be the same color as the back pad, the few times it hasn’t been, I'm convinced that’s why I didn’t win!”
Jackie must have had the right color tape in the braid when Skip To My MJJZ won the Prairie Gold Stake with Rod driving in November 2007, giving her one of her most memorable racing moments.
Another great memory that ranks near the top of her list was when Crackers Hot Shot, a filly owned and trained by Rod and groomed by Jackie, was honoured as Alberta’s Horse of the Year in 2013. The daughter of Camcracker put together an impressive sophomore season that included five wins in seven races and more than $82,000 in earnings.
The dedicated participant enjoys the different phases of racing. “I love the babies coming in, then when it’s almost time to qualify them I really start to get excited. The most rewarding aspect of my job is watching a two-year-old develop into a race horse, or when one of my horses races well and is so proud of itself, I just love how proud they are.”
And what keeps someone who has been in the industry for 30 years fresh and enthusiastic about racing? “It’s the next race and the next set of future champions, we hope!”
(Faces of Racing image courtesy Evelyn Sabraw)