​On   June  23rd,  three  young  guns  showed  up  in  Alberta  to  raise  money  for  the fourth  annual Pacing For Charity event.  Though the flights may have been turbulent, the day was amazing.
​ 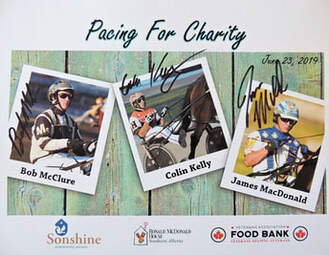 Returning to Alberta to participate for his fourth time, James MacDonald, the veteran driver of the crew, donated his entire driving earnings for the day of $734.10.  Matching that donation was The Track on 2 Inc. the new racing and event centre in central Alberta.  Located near the city of Lacombe The Track on 2 Inc. is a fabulous venue including a modern kitchen, bar, luxury suite and large event rooms.  The Veterans Associations Food Bank funds were raised when owner Rod Therres donated earnings from his newly acquired colt “Don’t Wannabe Late”, co-owners Nathan Sobey, Diane Bertrand, and Robert Gilhespy donated earnings from “Icy Blue Scooter” and local driver Ryan Grundy gave earnings from his drives for the entire weekend.  Along with the generous donations of racing fans and patrons The Veterans Association Food Bank will be receiving a cheque for $3374.95.
​
Ronald McDonald House Charities and driver Colin Kelly were a hit with the crowd as well.  A standout in his orange colours, Colin also donated the weekends driving earnings.  Colin arrived a day early to spend some family time with local driver, his brother Dave Kelly.  The brothers are very close, and it reminds us all how important family is and how family orientated our industry is.  Colin’s earnings were matched by Meridian Farms of High River Alberta.  A well-known breeding facility not only in the west but across the country, Meridian Farms participates in many local initiatives in the communities’ harness racing takes place as well as communities that have no ties to racing.  One such initiative started by Meridian and continuing on with the support of Fred Gillis, is Fun For Fans.  This group sold t-shirts by donation and added to the grand total of $1350.40 raised for Ronald McDonald House Charities.

​ Bob McClure found his way to the winner’s circle for Sonshine Community Services and they were more than pleased with the results.  Local horse enthusiast and owner Raymond Henry joined this wonderful cause and gave matching donations for Bob and Sonshine.  Raymond is well known around the track as a smiling, fun loving guy.  He attends the races, very close to every race day, spends time on the farm with his horses, which including breeding stock, as well as time just making people smile.  He goes out of his way to make others enjoy racing and is very thoughtful and supportive to the entire industry.  With all of this involvement $1010.60 was raised for Sonshine Community Services.
All charities benefited from our assistant race secretary and paddock judge Raeann Gemmill.  Raeann is always supportive of every charity/non-profit event that takes place at the racetracks where she is involved and gave donations to each charity.
With all this support, a grand total of $5,735.95 was raised for the participating charities.  Everyone had a lot of fun and enjoyed a great BBQ sponsored by Century Downs and ASHA after the races, and had time to take pictures, get autographs and visit with each other and the visiting drivers.

​ASHA would like to thank James MacDonald, Bob McClure and Colin Kelly for giving so much to come to Alberta for this event.  We would also like to send our gratitude out to Century Downs for their support and to all who donated for your generosity.  And a HUGE thank you to our local horsemen and women.  Owners and trainers who chose the visiting drivers for their horses, local drivers who willingly gave up drives for this charity day, and all Alberta Horsemen for helping make these visitors welcome. These programs would not be possible without your kindness and support.​ 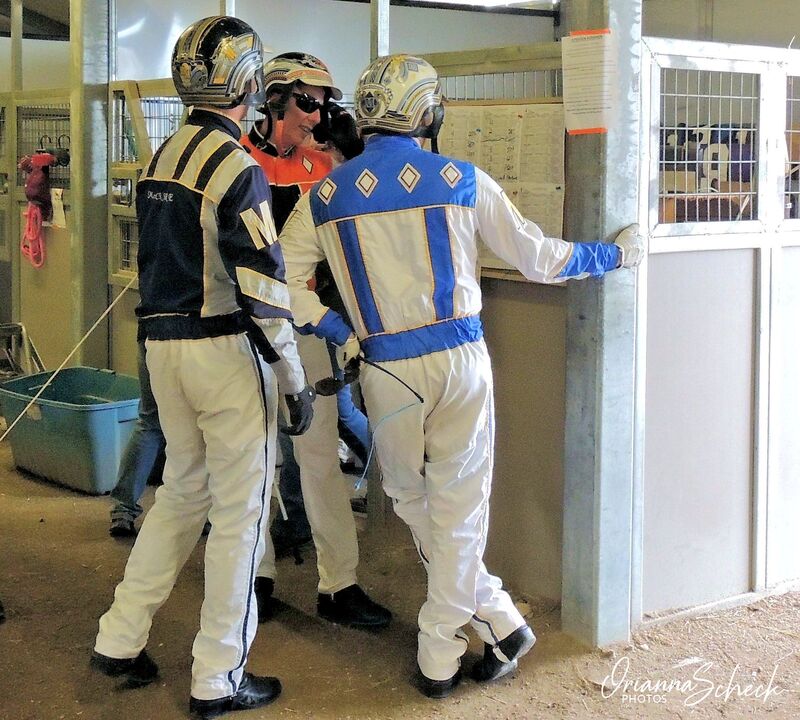 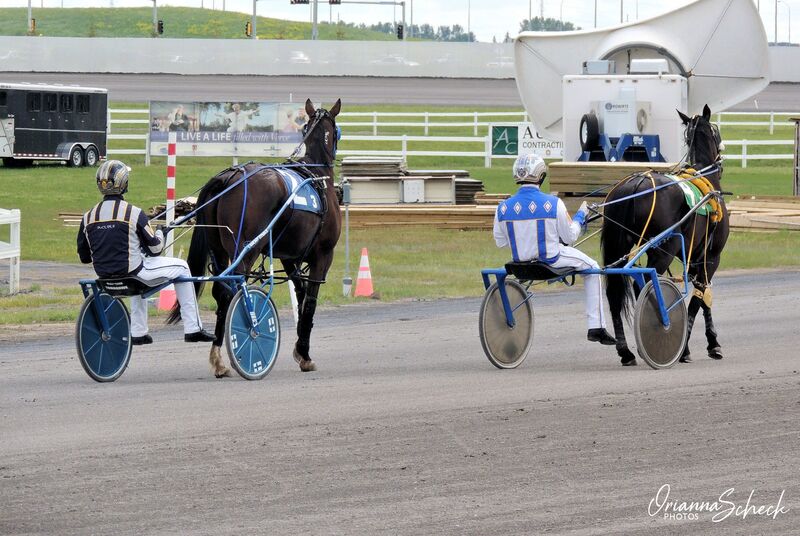 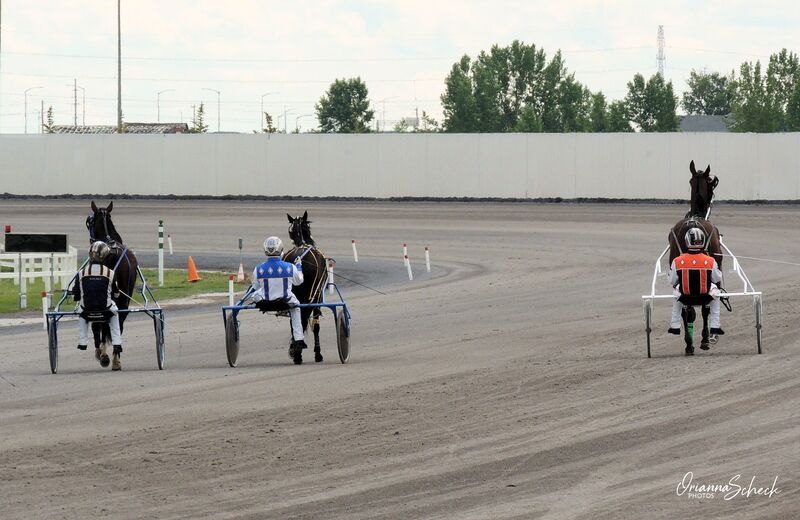 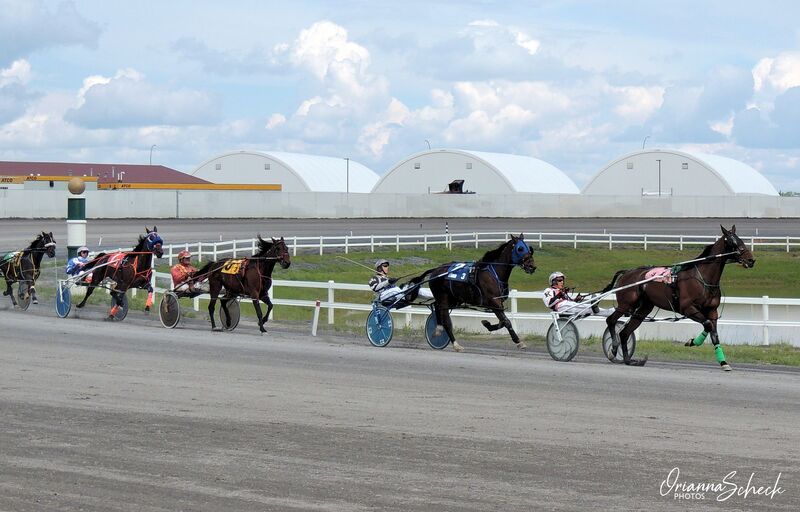 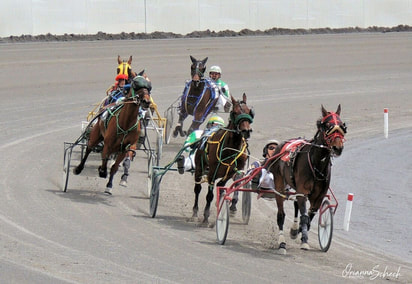 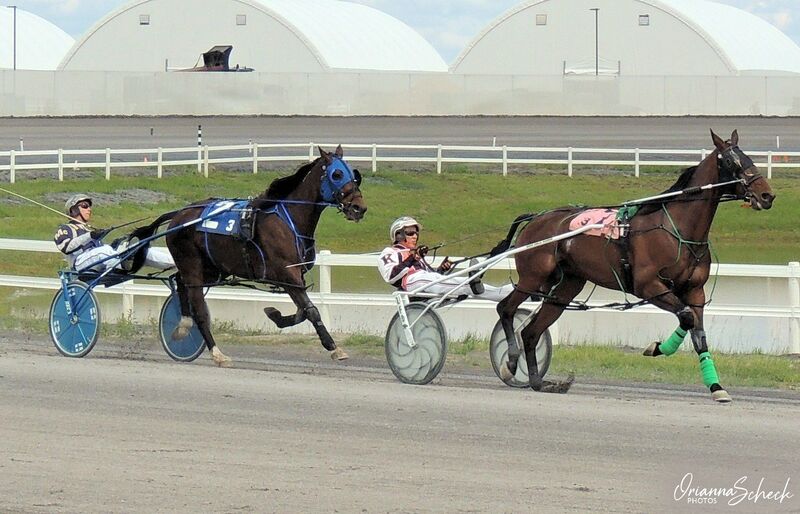 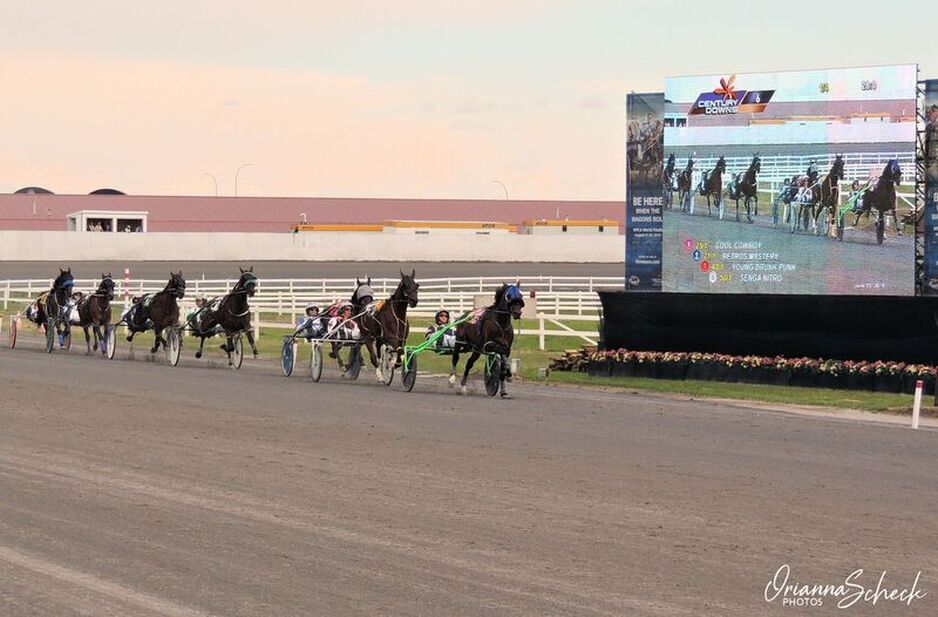 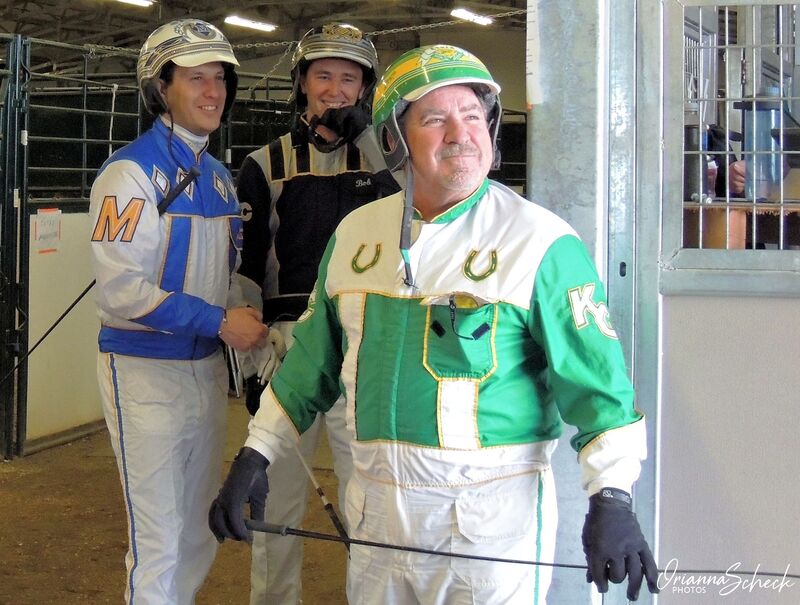 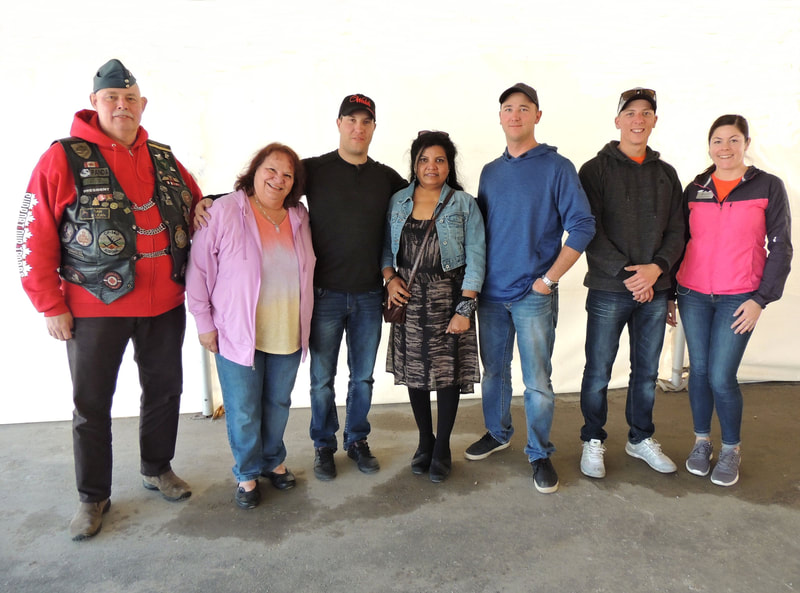 Group photo of Drivers and their Charities 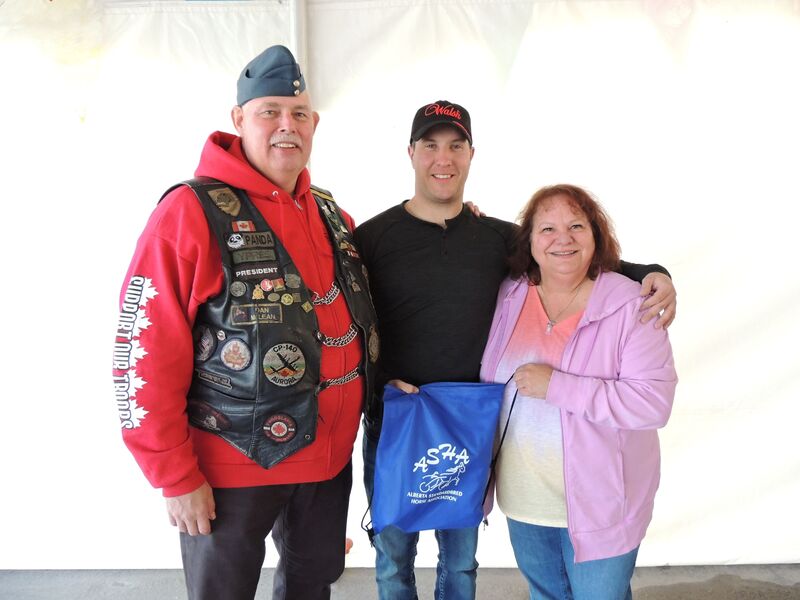 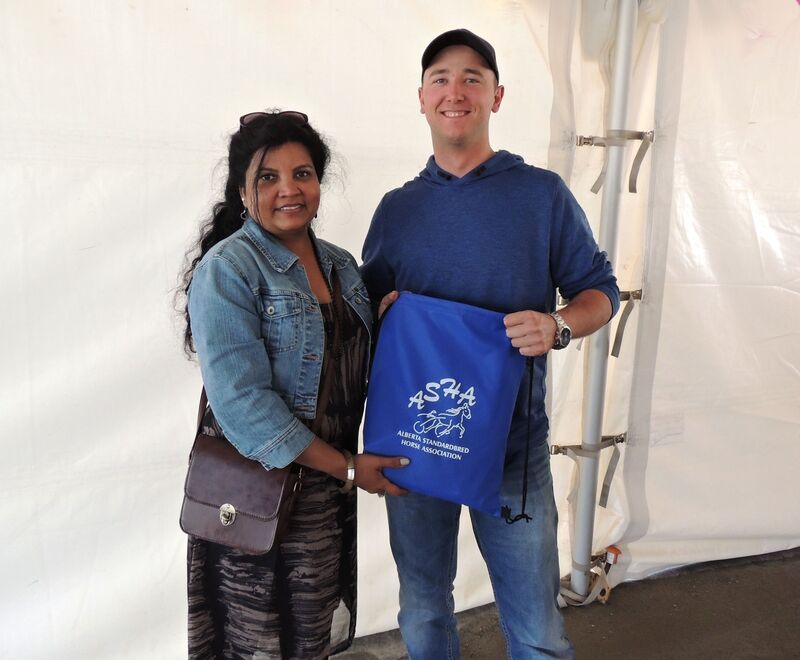 Bob McClure with Caroline of the Sonshine Community Services 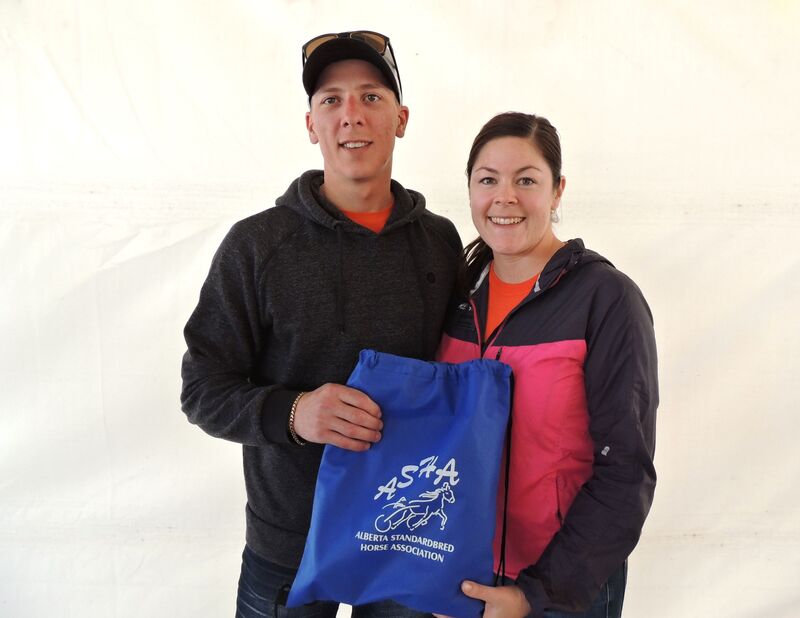 Colin Kelly with Claire of the Ronald McDonald House Charities 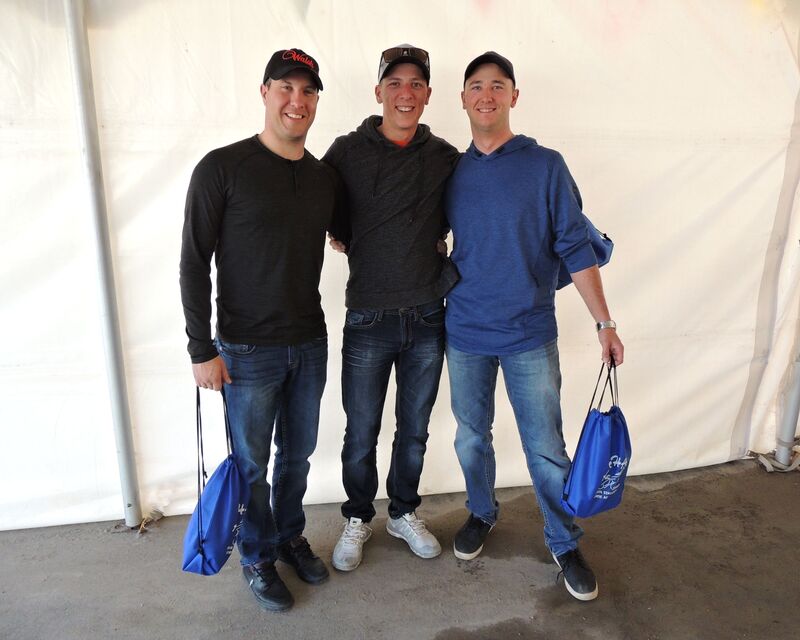 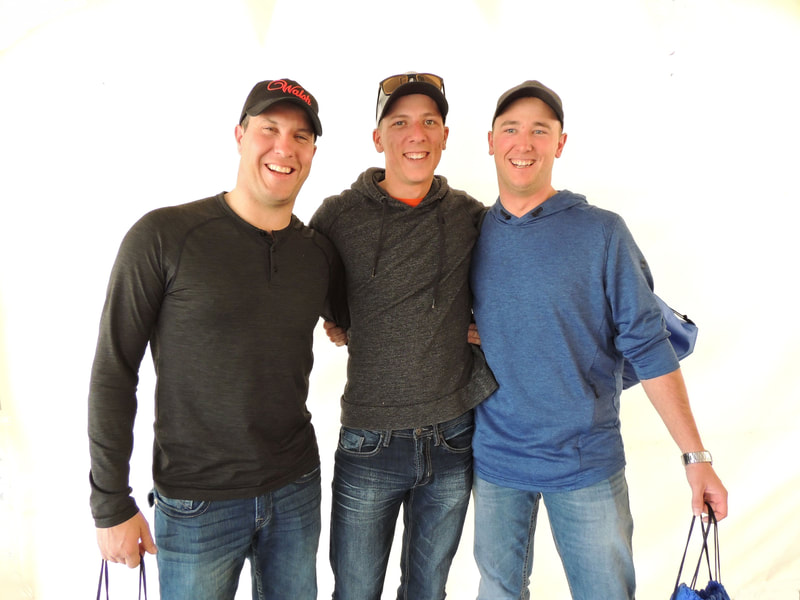